I have thousands of images stored on flickr – over fifteen thousand, actually. My photos get hundreds of views a day,sometimes thousands, and I am always interested to see which pictures have been viewed, and why. The flickr stats page gives the sources of views, both overall and for each picture viewed. The results often amuse me.

Yesterday, I uploaded some new pictures. Flickr seems to give a greater weight to new images in its search results. (I have no idea as to the actual algorithms, but often when I upload new pictures they get a lot of hits from searches.) This picture got the hightest number of hits yesterday: it was tagged with “nude”. I think the viewers might have been disappointed. Perhaps I should tag all my pictures “nude” just to troll the searchers – I’d get a lot more hits! 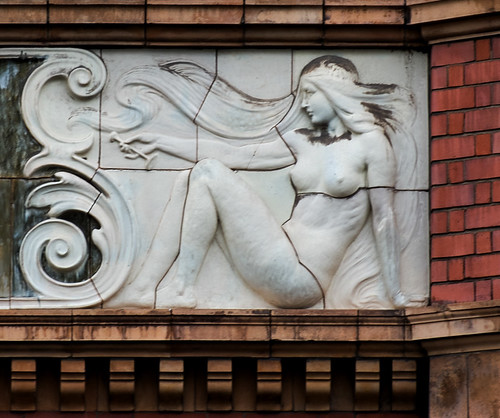 Close behind it were a series of pictures of Paul Booth and Ryan Quigley, two jazz musicians, that I put up recently. Because people were searching for “Paul Ryan”. 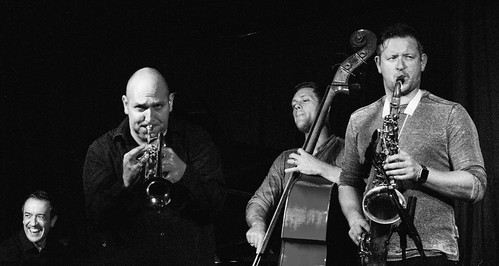 My pictures of jazz musicians often crop up in some strange searches, and I wonder what the people who click on them were really expecting. Back in July, I took several pictures of saxophonist Tori Freestone, tagged with “black & white”, which I use for al my black and white images. They have been getting a lot of views from people searching for “Tori Black”, who is apparently a star within the adult video industry. I can’t imagine they were expecting my photos! 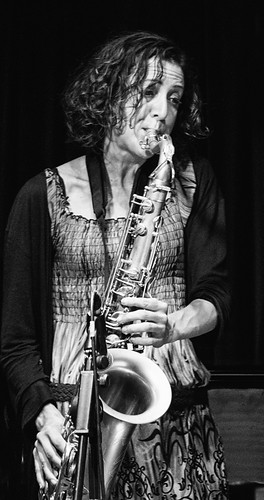 The most bizarre goes back a while, but it continues to amuse. It’s a black and white picture of pianist Dick Hyman at the Nice Jazz Festival in the late 1970s. People saw it when they searched for “nice black dick”…! 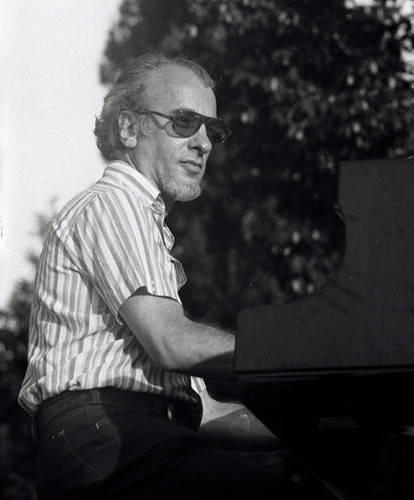 I have been taking photographs at jazz gigs for nearly forty years: the first jazz photos I took were at the Nice Jazz Festival in 1977. I took a lot of photos at gigs between 1984 or 1985 and 1994 – on black and white film back then.

I have thousands of negatives, and I have an ongoing project to scan them. I have started with photos from gigs, and I’ll be uploading them over the next few weeks, and posting them to this blog.

I doubt that I shall write about these gigs, it being too long ago, though some of them I can remember clearly. Others I have no recollection of at all – it is only through seeing the photos that I know I was there.

So you may well notice pictures of thirty year old gigs being posted, with the tag archive jazz photographs. You can also see them over on my “culture” blog, On The Beat.

For everything that has been written about selfies in the last few months, one could be fooled into thinking that using oneself as a model is a new phenomenon. Of course, it isn’t: artists have been creating self portraits for centuries – perhaps, as I recall reading somewhere – because the artist is the one model always available, for free.

I haven’t taken formal portraits – of my self or anyone else – for a long time, but last week I needed to attach a photograph to a form; ages ago, a friend said that they thought my online avatar looked like someone wanted by the police.

So I set out to take a new self portrait, setting up the tripod and positioning myself against a plain coloured wall. The form required no shadows (nor any hint of emotion), and I used a flash for that.

But for the avatar, I was happy to switch the flash off and, lit from the window to the side, emphasise the shadow.

The avatar uses a colour version, but I have just thought of stripping the colour out to create a harsh black and white image, which I prefer. Derivative (Bailey, perhaps?), but I rather like it. 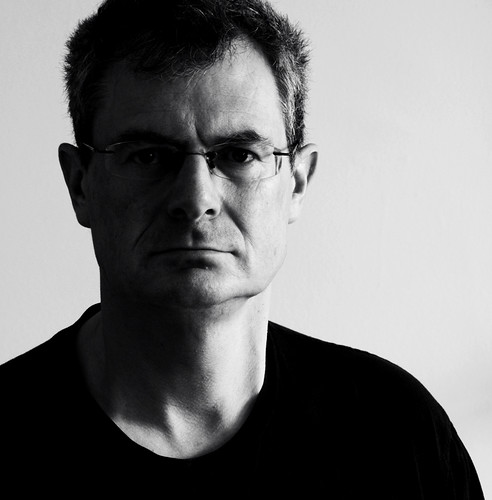 Back in February, having spent a couple of days wandering around London, I noticed an interesting looking church in the eastern suburbs of Edinburgh from the train. I thought I really ought to go and have a look. Sometime.

I realised that the were many areas of the city I had never visited, including that which housed the church – despite having spent more than twenty years, on and off, living in Edinburgh.

And so I decided to start a new project. Random Walks around the city, taking me to new places and letting me see the city with fresh eyes.

I decided, but I didn’t actually start. The weather in February and March and April was pretty awful; May I was away; and the summer was glorious, and I was busy.

Down in London again in October, I was again exploring bits of the city I had never been to before, coming across interesting buildings and reminders of history, as well as parts I knew well. And on return to Edinburgh, I put my idea fit a new project into action.

Using a random number between 1 and 360 to give a direction, I look at a map and see what there is, between two and three miles away. Then I head off to walk there, trying to take in streets I don’t know.

This isn’t perfect. In one direction, the sea cuts me off at 1.5 miles; in another, Holyrood Park and Arthur’s Seat occupy a large amount of the space. Sometimes I take a wrong turning and don’t actually get to where I was aiming. But once or twice a week for the last month, I have gone out to look at new places. And it is still pretty random.

I take photographs on the way (and back). Not all the routes can be unknown – there are only so many roads from my flat – and I have covered very nearly the same ground twice, after only one month.

But I have also seen lots of new things, and been to places I would have no need to go to otherwise.

The photos from these walls will be posted with the handy title “Random Walks”, and the posts will be tagged like that, too, should you want to catch up on them.

My journey from Unst back to Edinburgh started with a short ferry ride to Yell. I thought about visiting the hamlet of Gloup, where the drowned men came from, but instead decided to see if I could find otters. Despite looking, I hadn’t seen otters on Unst. Yell has a lot of otters. When the BBC want to film otters, they go to Yell. Apparently it is otter-central for otters in Europe. (Interestingly, they were extinct in Yell and reintroduced. Though I can’t remember where I read this.) So I went to a bit of the coast renowned for its otters. I went to Otter Wick. The clue is in the name.

It also had the White Lady, a figurehead from a sunken boat: she stands on the shore, looking toward the site of the wreck. She is crudely carved, painted white, and frankly spooky.

I didn’t see any otters; more irritating, I bumped into a couple who told me they had seen otters on Unst the previous evening. I did see lots of seals in Yell, and had a good walk along the coast before heading to the next ferry, to Mainland.

It was cloudy on Mainland. Rather than head straight to Lerwick, where I was staying, I decided to go north. I drove right to the north, past hamlets and Nordic-looking towns, oil depots and large fjord-like voes.

I stopped and went for a walk. I walked from the east coast of Mainland to the west; from the North Sea to the Atlantic Ocean. It took me a minute or so: despite being a fair distance from the north of the island, at Mavis Grind the inlet – voe – to the east and that to the west almost meet, leaving a narrow isthmus barely wider than the road. The Vikings used to carry their long boats from one side to the other, to save the long sail north and then south around to top of Mainland. (The Scottish place name Tarbert – or Tarbet – indicates the same, which is why it is such a common place name around the coast.)

The road sign just south Mavis Grind warns of otters crossing the road. Not when I was there, there weren’t. I went on a couple of walks along the coast near where I was staying, on at dusk, the other, longer, during the day.

I went at dusk hoping to see otters, active around the turn of the tide (apparently). No otters, but a striking sky and a good walk along the shore.

END_OF_DOCUMENT_TOKEN_TO_BE_REPLACED

There are two small, community museums on Unst, and I waited for the bad weather day to take advantage of them. It is two for the price of one: the same ticket gets you into both. They were both in easy walking distance for me; but it was pissing with rain, and I was buggered if I were going to get drenched again. I drove.

The boat haven is a large shed, full of boats. I wasn’t certain; it didn’t seem my kind of thing. I didn’t think a collection of boats would be interesting.

I was completely, totally wrong. It was fascinating. Not really the boats themselves – though they were quite beautiful, some of them, crafted with great craft and love – but for the stories they told.
END_OF_DOCUMENT_TOKEN_TO_BE_REPLACED

Unst is nearer to Bergen in Norway than it is to Edinburgh, and it was Norwegian before it was Scottish, the result of Viking invasions in the 8th century. Before that, it was inhabited by the Picts.

Nobody is really sure what happened, of course (unlike the transfer from Norwegian to Scottish power in the 14th century, the political shenanigans of which are well documented – needless to say, Norway might have a valid claim to Shetland, even today…).
END_OF_DOCUMENT_TOKEN_TO_BE_REPLACED

I still hadn’t seen puffins. I went to the Hermaness reserve headquarters to see if the warden could point me in the right direction. The HQ is in the former shore house for Muckle Flugga, where lighthouse keepers would stay during their off periods, and where their families lived the whole time.

The warden want there, but there is very good display, including a map showing where different birds could be seen. Puffins should be – exactly where I had been walking.

So I went back there.

I walked the longer but faster path, west to the cliffs and then north. I met a woman and we chatted briefly; she was keen to see bonxies but hadn’t realised that they were the large birds all around. I passed a tall guy carrying a large tripod and a load of camera equipment.

It was a fine day, though rain was forecast. The views, same as before but in reverse, and in different light, were good. I kept my eyes open, scanning the cliffs and the sky for puffins.

I saw several as walked back until I walked back until once more I was the most northerly person in Britain, opposite the lighthouse. On the step grass slopes down to cliffs were a while troop of puffins. Not a crowd, not the hordes that I had expected but quite a few.

END_OF_DOCUMENT_TOKEN_TO_BE_REPLACED

Its northerly position makes Unst militarily important: RAF Skaw was established during the war to monitor (potentially hostile) shipping traffic; and RAF Saxa Vord joined it and continued after the war as a radar tracking station, part of the cold war effort.

And cold it must have been. The tracking station itself is the top of the highest hill on the island; it is the site of the highest recorded wind speed in the UK – 197 mph. At which point the equipment was blown away. So it might have been even stronger. (Two people died in Hermaness in the storm when the hut in which they were sheltering was blown away.)
END_OF_DOCUMENT_TOKEN_TO_BE_REPLACED